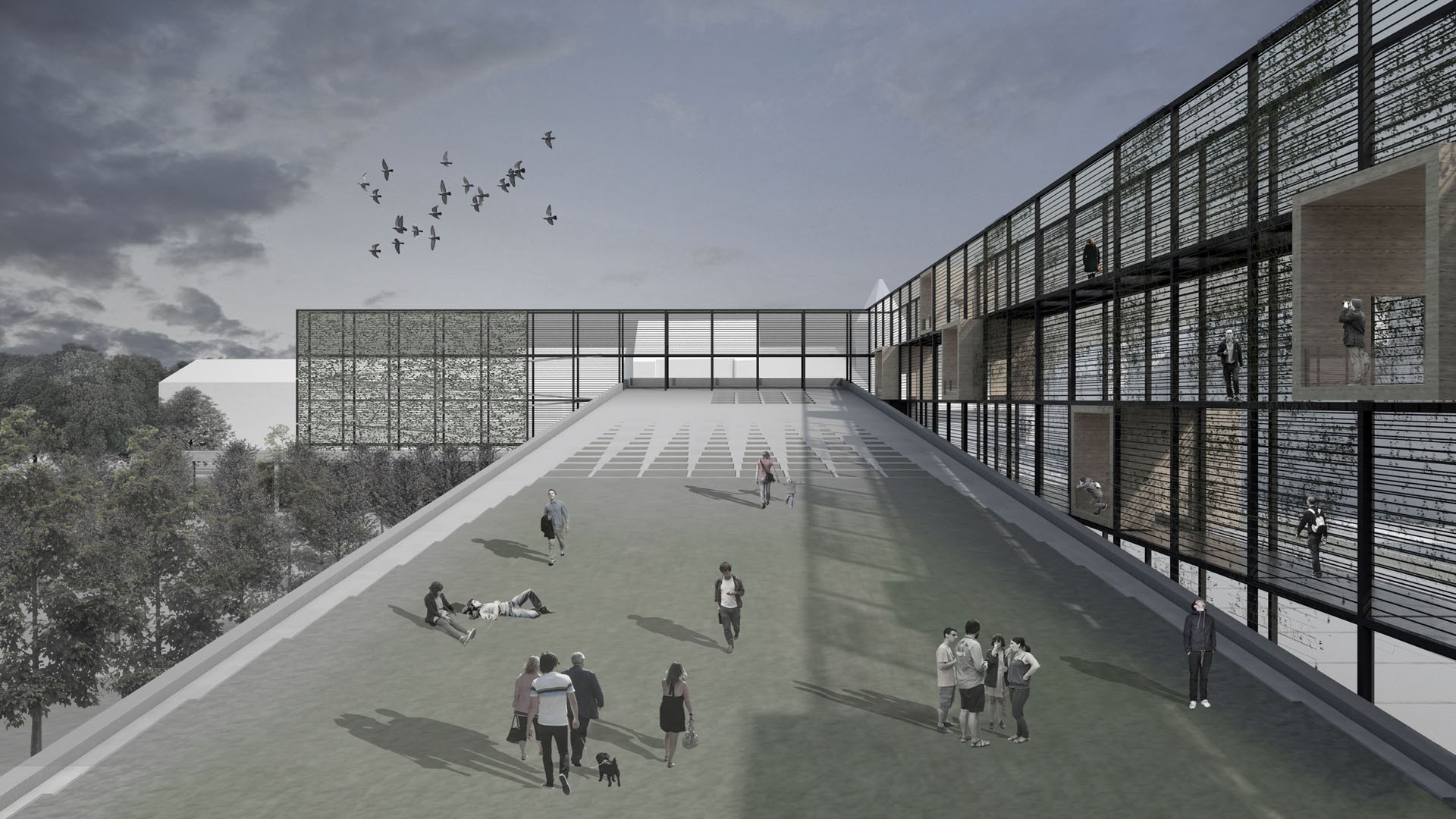 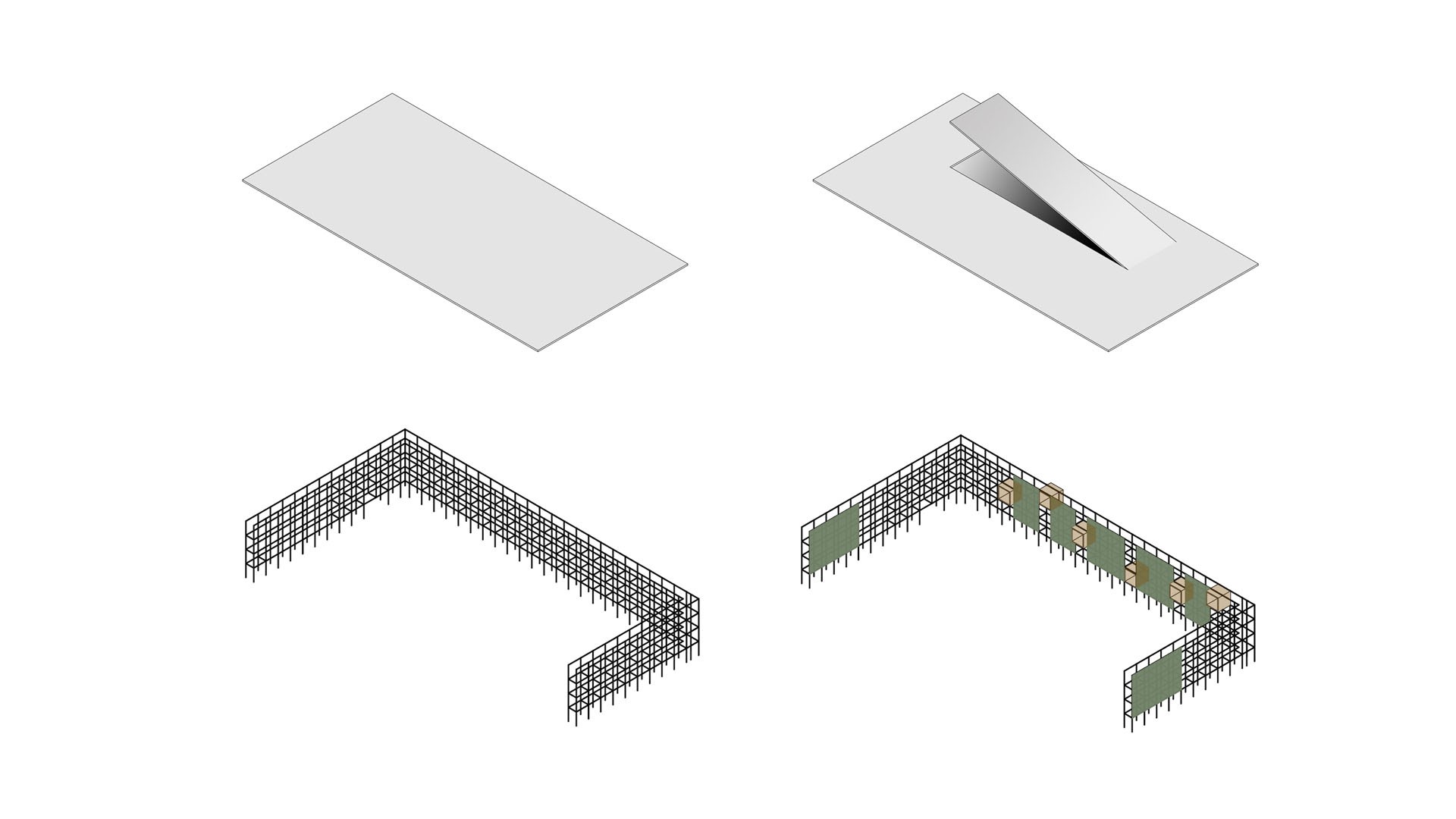 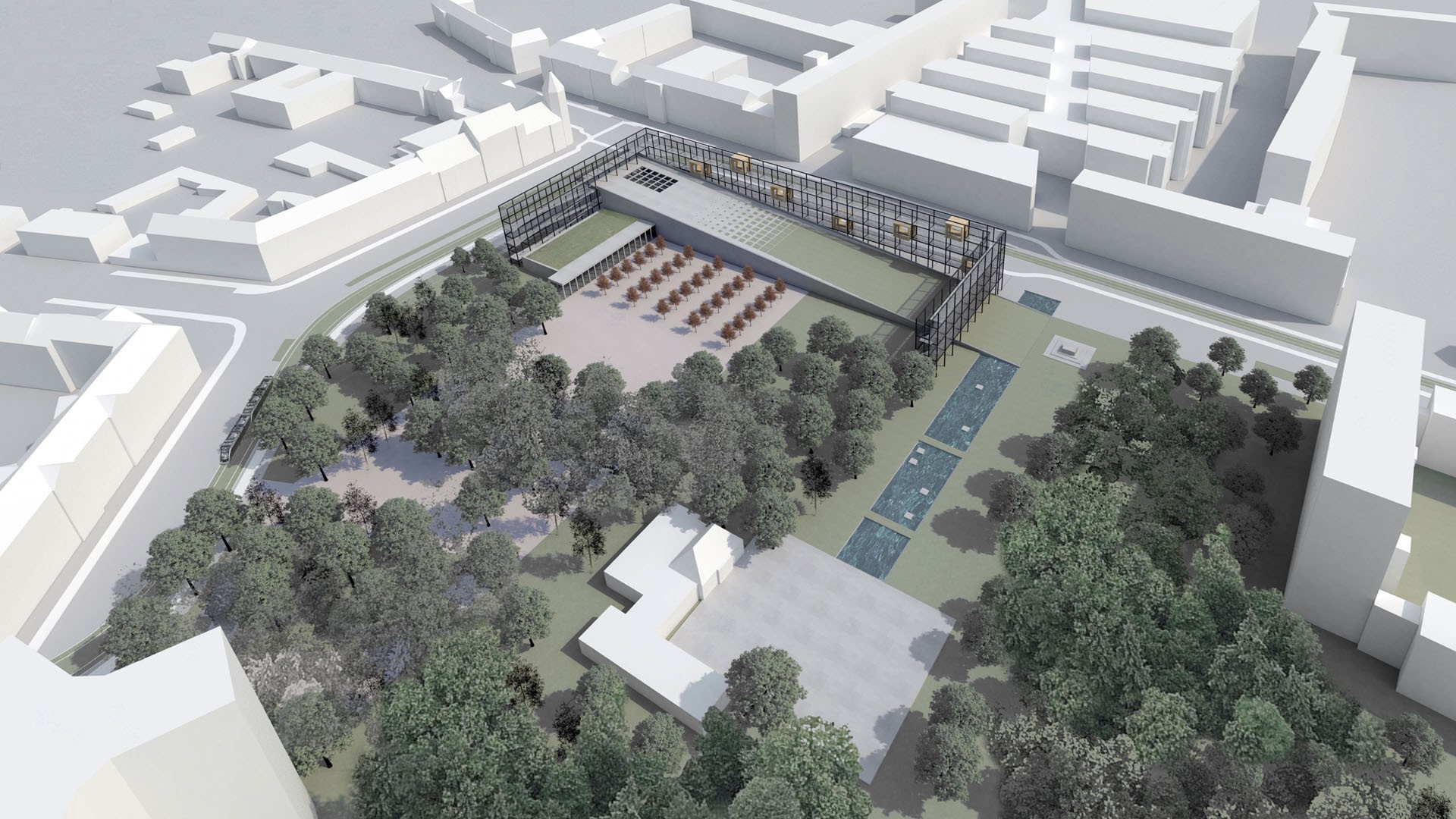 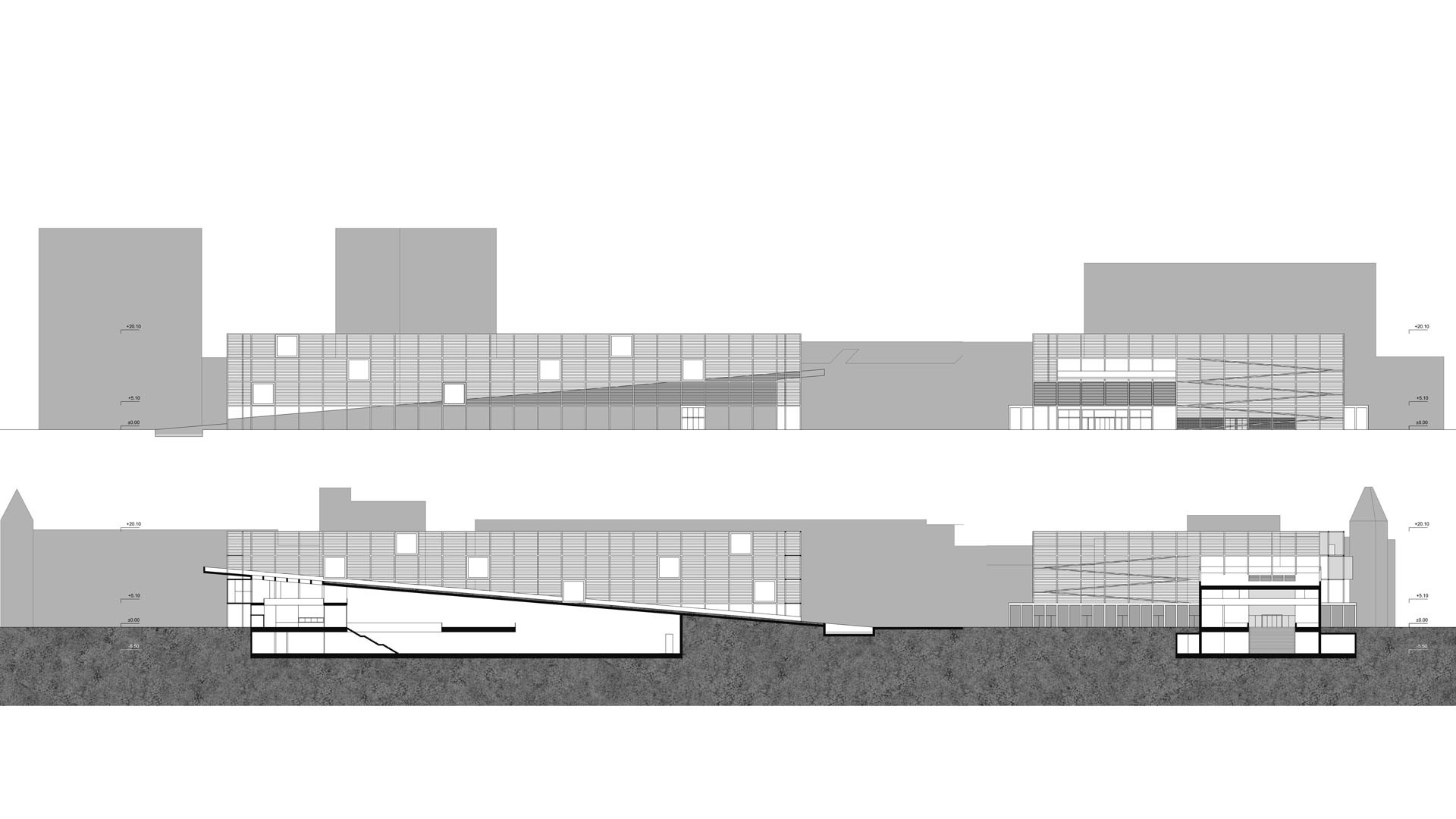 “What we observe is not nature itself, but nature exposed to our method of questioning.”   Werner Heisenberg

The museum as a building act, should try answering these questions:

How is it integrated in its spatial field, as a paradigm, an exemplar topology in the present time?

The design proposal is approached with a landscape point of view. Two conceptual gestures constitute the proposal: The “terrain” that is transformed and the green urban “room” that transforms.

The first “gesture” constitutes of the folding surface that is processed as a gradual transition from the natural to the built environment that shelters the necessary program functions of the museum. Therefore, the natural materiality is gradually transformed in a plaza-belvedere where you can stand and see the world as a rising thought. A structure is incorporated in the locus and the ecosystem of the park as part of its geography. The museum is an intrinsic part of the park. It does not disturb its ecosystem. It assumes the horizontality and density of the natural elements as well as the atmosphere of the place. Moving towards the elevated public square throughout a continuous circulation network transforms the space into a field of actions, demonstrating W. Gropius’ definition of constructing as a creation of events.

The second “gesture” consists of the “green open room”, a configuration that encloses and incorporates the sloping ground like a scaffolding wall that is open to the park. It is a holistic approach, a metaphor of the structure as a necessary foundation for any construction, it functions as a landmark denotating the museum. It is an interactive transparent wall that denies its mass materiality yet becomes a support for creepers thus giving space for nature to coexist and integrating to the built environment. At the same time it correlates to the scale of the city and is in tune with the surrounding urban typologies. The idea of an open room is at the same time a plant diaphragm that encloses, a hanging garden that offers diverse sensory experiences as well as a structure that bears all the circulation, a projection surface and cubical observatories viewing the nature and the city. The room becomes a part of public space, a new interpretation of the way we inhabit it. It is an alluring gesture open to interacting with the public that transforms this place to an event.

The transfer of terms to urban design such as: Enhancement and regeneration of natural elements define a cultural point of view in terms of sustainability. The park becomes part of the museum and vice versa, the structure is added to its natural framework.Landscape terms related to materiality such as:

– Water surfaces (waterscape) complete the conditions that constitute the landscaping. These hard and soft surfaces as well as plant filters combined, contribute to the balance of natural and built.

The museum plan is organized linearly under the sloping terrain. An elongated space defines the exhibition area. It is a spacious interior, open to different configurations, spanning on two levels dedicated to the temporary exhibition and the permanent collection. Space is defined as a surrounding time, it becomes a comprehensive text that is only relevant to “here”, as a condition that it dictates.

The notion of a universal space, a primary preoccupation of modernism has since been reconsidered and the once abstract space is transformed in a stimulating environment that evokes emotions. Space now is a field, a wide spectrum of influences and correlations that set in as an interactive condition, a part of a dynamic system.

The museum space is not dealt with simply as an area that seeks a merely aesthetic intervention, but as the exploration of its existential identity transfusing atmospheres, place and its lost meaning. It is integrated to the park, an active intervention to the urban development of Dessau, as a place culturally defined. This relation can be interpreted as the cohabitation of the spirit of Bauhaus with the spirit of the park, defining in a peculiar union its genius loci, a land that interprets and evolves the spirituality of a movement, as an open field to the collective demands and environmental challenges, a TERRA LOCUS.